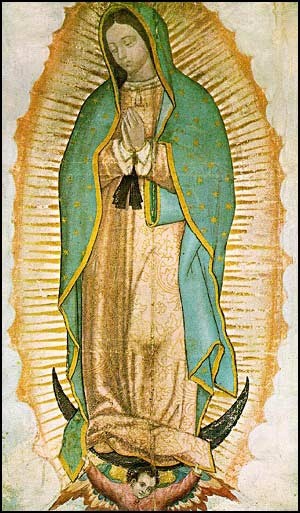 Today,we honor our sister and brothers in Mexico
as they celebrate the appearance of the Mother of Jesus  to a poor peasant native Mexican.

An elderly Indian man named Chuauhtlatoczin (“Juan Diego” in Spanish) had a vision of Mary, the mother of Jesus, at Tepeyac, a squalid Indian village outside of Mexico City, 469 years ago. Mary directed Juan Diego to tell the bishop to build the church in Tepeyac. The Spanish bishop, however, dismissed the Indian’s tale as mere superstition. He asked that he bring some sort of proof, if he wanted to be taken seriously. Three days later, the Virgin Mary appeared again and told Juan Diego to pick the exquisitely beautiful roses that had miraculously bloomed amidst December snows, and take them as a sign to the bishop. When the Indian opened his poncho to present the roses to the bishop, the flowers poured out from his poncho to reveal an image of the Virgin Mary painted on the inside of the poncho. That image hangs today in the Basilica of Guadalupe in Mexico City and is venerated by thousands of pilgrims from all over the world.

Guadalupe is a “vision” story and, like all such stories, tells us something about God and something about ourselves. More precisely, it tells us how God wants to be among us. St. Juan Diego’s vision of where God wants to be or whom we should listen to should come as no surprise to us. Throughout history, God has consistently chosen to be with poor people. In that respect, the Blessed Virgin Mary’s message to St. Juan Diego at Guadalupe is a restatement of Jesus’ mission: That God is in those who are hungry, thirsty, imprisoned, naked, sick, stranger, and suffering. The challenge for us is to heed the message of Our Lady of Guadalupe, the message of Christ’s Gospel, and reach out to those who belong to the margins of our society.
— Source: The Manila Bulletin online.

1.    THE LADY STOOD IN FRONT OF THE SUN
She was greater than the dreaded Huitzilopochtli, their
sun-god of war.
2.    HER FOOT RESTED ON THE CRESCENT
MOON
She had clearly crushed Quetzalcoatl,
the feathered serpent moon-god.
3.   THE STARS STREWN ACROSS THE MANTLE
She was greater than the stars of heaven which they worshipped.
She was a virgin and the Queen of the heavens for Virgo rests over her womb and the northern crown upon her head.
She appeared on December 12, 1531 and the stars that she wore are the constellations of the stars that appeared in the sky that day!
4.   THE BLUE‑GREEN HUE OF HER MANTLE
She was a Queen because she wears the color of royalty.
5.   THE BLACK CROSS ON THE BROOCH AT HER NECK
Her God was that of the Spanish Missionaries, Jesus Christ her son who died
on the cross for all mankind.
6.   THE BLACK BELT
She was with child because she wore the Aztec Maternity Belt.
7.   THE FOUR PETAL FLOWER OVER THE WOMB
She was the Mother of God because the flower was a special symbol of
life, movement and deity-the center of the universe.
8. HER HANDS ARE JOINED IN PRAYER
She was not God but clearly there was one greater than Her and she
pointed her finger to the cross on her brooch.
9. THE DESIGN ON HER ROSE COLORED GARMENT
She is the Queen of the Earth because she is wearing a contour map of
Mexico telling the Indians exactly where the apparition took place.

10. The stars on Our Lady’s Mantle coincide with the constellations in the sky on
December 12, 1531. All who have scientifically examined the image of Our
Lady over the centuries confess that its properties are absolutely unique
and so inexplicable in human terms that the image can only be supernatural!

P. S.  Today is the first anniversary of this blog.

I rejoice and give thanks for the Lord’s gift of creativity in word and image to share with you.  There have been 90 posts this year — an average of three a week, though there have been long times in which I was silent.  My goal is to post every day from the fruit of my reflection and prayer.  How long it will take to get there, I don’t know.  I just respond to the inspiration God gives me when he so chooses.  A single post takes about 2 -3 hours to write and compose. 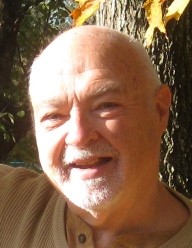 One thought on “Advent Day 14 – God prefers the poor”