one of the hundreds of Florida’s cool / clear springs

We’re in an important series of Sunday scriptures used to help catechumens (those preparing to meet the Lord in baptism).  In using this series of three stories (1) The Woman at the Well, (2) The Man Born Blind (next Sunday) and (3) the Raising of Lazarus, the Church all through its history asks  John the Evangelist to interpret  for us how he sees Jesus and his significance for us.

This coming Sunday’s gospel (March 27, 2011) has Jesus and his buddies passing through Samaritan territory. The hour’s about noon and he’s tired, hot, dusty, sweaty (I guess) and thirsty. He sits down by Jacob’s well but has no bucket; the cool stuff is right down there but he can’t access it.  Why not take a moment to read the entire fascinating story?   (JOHN 4:1-42)

Along comes a woman with a bucket and he’s about to break all kinds of taboos:  One: Jews don’t associate with Samaritans. And two: men don’t speak to women in public. She is shocked by his shattering both of these impenetrable barriers and is quite flustered. And three: she’s not exactly a woman of high moral standing.

He soon puts her at ease by asking her for a drink, and as the great Teacher he is, he reverses the symbol and says he will give her “living waters so she will never be thirsty again.” 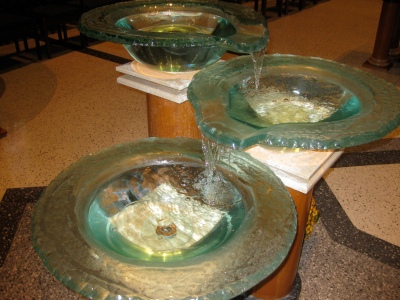 She’s intrigued and begins to relax in his accepting, easy manner. (We forget that He was probably a handsome 31 year old.) In fact, she quickly feels such total acceptance that she trusts him to touch her on the inside. The conversation cuts to the quick very quickly. She has had “five husbands and the one she’s living with now is not her husband.”

Jesus has a true pastoral manner that, very sadly, so many of my friends who have left the church did not get from a priest or family or a community when they needed it the most.

I pray the rosary everyday and one of the new “Mysteries of Light”  has us meditate on “the proclamation of the kingdom.” At some point because I wasn’t preaching and celebrating Mass publicly I realized that I must learn how to share (proclaim ) the Good News not over the heads of masses of people but to share it as Jesus did here in a stranger’s town —  one person at a time. I ache inside when I realize so many have turned a deaf ear to the church because our lives often do not match our words or because we use harsh and condemning words which push people away and cauterize their souls instead of drawing them close.

Through my own life experience I have learned to do as Jesus did with the woman at the well. He befriended her first.  He treated her as a person. He spoke kindly. He did not condemn her but in revealing his own vulnerability (his own thirst) he brought her up to his own level.

In my videographer’s eye I can  see the two of them sitting close to each other on the wall of the well, gently conversing as Jesus listens to the story of her brokenness. Now that is the way — the only legitimate way, in my estimation — to preach the gospel — in mutual regard and respect, in mutual vulnerability.

If we keep screaming at people in harsh words we will be just tuned out.  St. Francis of Assisi is known to have said, “Preach the gospel; when necessary, use words.”

I am fiercely pro-life; I don’t even want to kill a roach (I escort them out of my house!)And we have a beautiful truth to share — the sacredness of all life and the sacredness, the holiness of the ground beneath our feet — but we can only get that message across when we get down with people’s hurt and need, without judging to cry with them and hug them instead of screaming at them. Jesus would never do that!  The only people he yelled at where the people who justified themselves and condemned others.

I repent of the times that I have been harsh with others. And those times have been many. And I pray that, day by day by day, Jesus, the gentle One, would help me to be more and more gentle and nurturing and respectful to those I meet whose lifestyles and values are different than mine.  For I know that if I want to have any influence on them, I need to let them get close to me and let them know that, despite everything, they have a place in my heart.

The story of the woman at the well ends by telling us that this wonderful human being in Whom-God-shown-through (Gospel of the Transfiguration — Second Sunday of Lent / Mark 9:2-10) broke down the wall of prejudice and hostility between Jews and Samaritans so dramatically that the whole town welcomed him and he and his buddies stayed for two days.

Now THAT, dear friends, is the Jesus I know and love.

in whose loving embrace I received non-judgmental love

and through whose example I myself desire to love without judgment.

may I always bring them to You, the spring of living water

so that the water you give them “will become IN THEM

a spring of living water welling up to eternal life.”

Here’s A hymn for your reflection Come to the Water.

I hope your Lent is going well.

Reflection on these three scriptures can bring us closer to Jesus.  Tune in the next two weeks.  They are amazing!