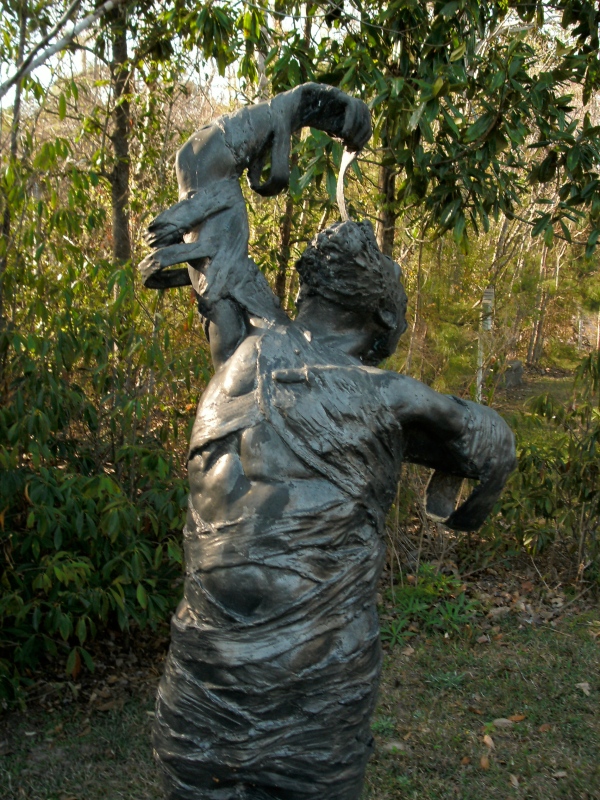 The Fifth Sunday of Lent

In today’s gospel, John the Evangelist has still another incredible story that the church uses to show us how Jesus wants to be for us: He is the One who unbinds our shackles / calls us forth from the tombs of our lives and offers us new and risen life!

When? For all eternity – Yes!  But also right here, right now.  (Also you can see the two previous posts for the first two stories in this trilogy by looking in the righthand column  “A thirsty man meets a thirsty woman (John, Chapter 4)  and “You light up my life” John, Chapter 9).  There are marvelous lessons for believers and unbelievers alike in this trilogy.)

The pictures  I use here are of a statue interpreting the unbinding of Lazarus that rests on the grounds of the Diocese of Lake Charles Retreat Center in Lake Charles, Louisiana.  My spiritual director had me meditate on it while I was on retreat there in 2010.   I titled it: “Addictions.”

As you read this story, try to see it through your own eyes and experience the story for yourself  Get into it.  It’s filled with emotion.  I’ve added a few reflections of my own along the way and use substantial excerpts from the NRSV version to carry the story along.  If you’d like to read the complete text first, here’s the link: John 11: 1-45.  When you’re done, go to the top left corner of you computer screen and find the  < back arrow; click on it and it will return you to this page.

Now take a moment to prepare yourself for this meditation.  Go to a quiet place and clear your mind from distractions.   Close your eyes for a while and focus on your breathing.  When you’re ready, begin reading . . . .

NOW a certain man was ill, Lazarus of Bethany, the village of Mary and her sister Martha. Mary was the one who anointed the Lord with perfume and wiped his feet with her hair; her brother Lazarus was ill. So the sisters sent a message to Jesus, “Lord, the one whom you love is ill.”

I can muse that  You, Jesus, often went to the home of Martha and Mary and Lazarus.  You probably went there to  “let your hair down.”  To get away from the crowds; even Your chosen  and sometimes unruly band of  Twelve  didn’t  ”get” what You were about.  I muse that You sometimes felt quite alone even among your friends.   But You really seem to enjoy the three siblings’ company.  You could be who You were, without pressure, without demand.  You could simply “be.”   And Your three friends were very comfortable with You as well.  . . . . .(Remember the story in Luke 10:38-42 when he came for dinner with them?)

Lord, help us to find friends who accept us as we are — warts and all — with whom we don’t have to pretend to be someone ~ something we’re not.  Where we can  bind our wounds and  be encouraged to become whole.  I thank you for the people in my life who are “there” for me when I need them.

But when Jesus heard it, he said, “This illness does not lead to death; rather it is for God’s glory.

Lord, You have enabled me  to realize, that illness and difficult times can end in glory for those who persevere / who trust /  who are willing to understand what such crosses will teach us.  . . . . . (Bethany is often used as a symbol of a place of retreat, of refreshment and renewal.)

Lord, help us to see the glory hiding in the dark places of our lives. . . .

Though Jesus loved Martha and her sister and Lazarus, after having heard that Lazarus was ill, he stayed two days longer in the place where he was.

Lord, help us to grow into patience — to wait for God’s time for things.

Then after this he said to the disciples, “Let us go to Judea again.” The disciples said to him, “Rabbi, the Jews were just now trying to stone you, and are you going there again?”  [ . . . . ] “Our friend Lazarus has fallen asleep, but I am going there to awaken him.”

How many of  us have fallen asleep to the reality of our lives?  Jesus, help me to WAKE UP! and really see and accept the reality of my life — both the good and the bad.

[. . . .] When Jesus arrived, he found that Lazarus had already been in the tomb four days.

Now Bethany was near Jerusalem, some two miles away, and many of the Jews had come to Martha and Mary to console them about their brother. When Martha heard that Jesus was coming, she went and met him, while Mary stayed at home.

Martha said to Jesus, “Lord, if you had been here, my brother would not have died. But even now I know that God will give you whatever you ask of him.”

Jesus said to her, “Your brother will rise again.”

Martha said to him, “I know that he will rise again in the resurrection on the last day.”

Jesus said to her, “I am the resurrection and the life. Those who believe in me, even though they die, will live, and everyone who lives and believes in me will never die. Do you believe this?”

Lord Jesus, I hear you saying this to ME.  As a priest I have consoled many who wept at the death of their own loved ones.  And throughout my own long years of illness, these words consoled me.  Somehow, I realized that, even on this side of the grave, You would grant me new and risen life.  And You are doing that RIGHT NOW!

She said to him, “Yes, Lord, I believe that you are the Messiah, the Son of God, the one coming into the world.”

Yes, Lord, You are the One who is my Friend / my Beloved / my Redeemer / my Shepherd and Companion on my life’s journey!

When Martha had said this, she went back and called her sister Mary, and told her privately, “The Teacher is here and is calling for you.” And when she heard it, she got up quickly and went to him.

Now Jesus had not yet come to the village, but was still at the place where Martha had met him. The Jews who were with her in the house, consoling her, saw Mary get up quickly and go out. They followed her because they thought that she was going to the tomb to weep there.

When Mary came where Jesus was and saw him, she knelt at his feet and said to him, “Lord, if you had been here, my brother would not have died.”

How often as a priest have I heard people say that!  “Why weren’t you here, Father?”

When Jesus saw her weeping, and the Jews who came with her also weeping, he was greatly disturbed in spirit and deeply moved.

Jesus, as I (we) reflect on this story, help us to feel / to sense / to realize that it is your humanness / Your humanity that saves us:  You are one like us!

Lord, You always weep with and for Your friends . . . and the folks who do not know You are a friend waiting for them.

So the Jews said, “See how he loved him!”

Jesus, I praise You that You were not afraid to express Your love to other men, especially to the young beloved disciple who leaned on Your breast at the Last Supper (John 21:20).

But some of them said, “Could not he who opened the eyes of the blind man have kept this man from dying?”

Jesus, You always worked in an atmosphere of hostility.  There were always people around who hated You because you loved. And You taught others to follow You in heroic love.

In these later days of Lent as we approach the celebration of Your passion, death and resurrection — this year — may we be soberly aware that it was the religious leaders who had you killed. Something for us to ponder even today.

Are we for You or against You?  Are we on the side of Love or Hate?

Then Jesus, again greatly disturbed, came to the tomb. It was a cave, and a stone was lying against it. 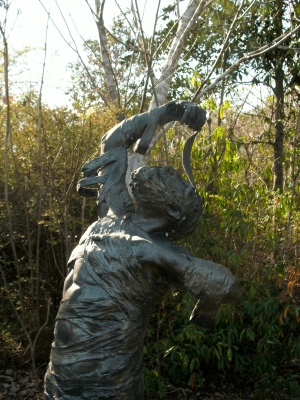 Jesus, I know many who have heavy stones laying across devastated lives.  Particularly my friends  who lie in the tomb of addiction.  I know families who weep and worry over the death of the spirits of their loved ones.

Jesus said, “Take away the stone.”

Martha, the sister of the dead man, said to him, “Lord, already there is a stench because he has been dead four days.”

There are always consequences to devastated lives.  They’re always hard to repair.

Jesus said to her, “Did I not tell you that if you believed, you would see the glory of God?”

. . . . but Jesus reminds us  to always  have hope in the ones we love — even when matters seem hopeless.

The dead man came out, his hands and feet bound with strips of cloth, and his face wrapped in a cloth.

Jesus said to them,

UNBIND HIM AND LET HIM GO FREE.”

I have come to realize, Lord, that coming out of our tombs is only the beginning of recovery.  Resurrection takes a long time. We need others to unbind us.  And I thank you for the people who have helped to unbind me — especially You, Lord!

Many of the Jews therefore, who had come with Mary and had seen what Jesus did, believed in him.

May we come to deepen OUR faith in You, Lord, and realize that as we stay close to You, You will unbind us and let us go free to new and risen life and love!

The Gospel of the Lord.

Praise to You, Lord Jesus Christ!

Now here is the song “He will raise you up on eagle’s wings” by Michael Joncas   sung at my parents’ funeral and so many others at which I had the honor of presiding.  We Catholics truly believe that we will live forever!  And for our young people, here is Queen singing Who wants to live forever?   Be sure to turn up your speakers and enter full screen. 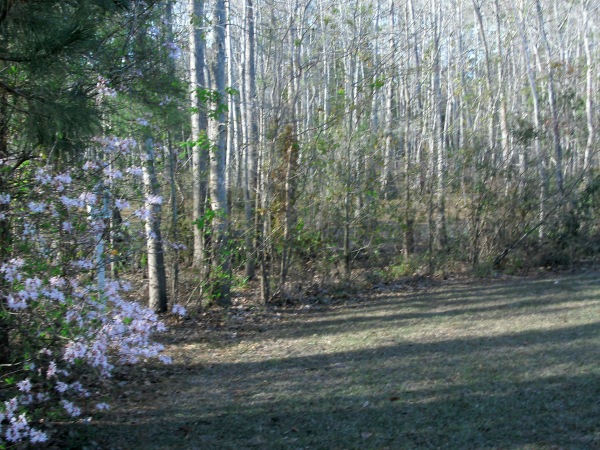 This post is dedicated to the young men for whom I’ve  prayed and their parents: May they be unbound from the shackles of their addictions and have new and risen life.

The New Revised Standard Version, copyright 1989 by the Division of Christian Education of the National Council of the Churches of Christ in the United States of America.All rights reserved.  From the oremus Bible Browser http://bible.oremus.org v2.2.5 2 March 2008.