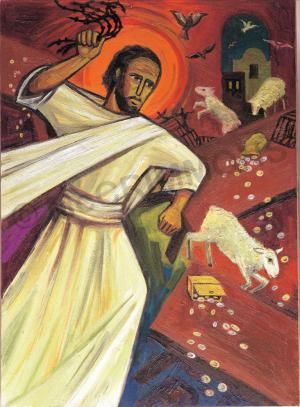 Once again, I rely heavily on our Scripture scholar-friend William Barclay for his insights for today’s reflections. First of all, he notes that John after the wedding feast at Cana of Galilee, at the beginning of Jesus’ ministry, he and his friends returned for a short visit to Capernaum on the north shore of the Sea of Galilee, and shortly after that he set out for Jerusalem to observe the Passover feast.

This, Barclay observes, is interesting in that John’s chronology of the life of Jesus is quite different from the other three gospels. In the others, Jesus is depicted as going to Jerusalem only once—the Passover feast in which he was crucified, the only visit to the holy city other than the one when he was a boy. But in John, Jesus makes frequent trips to Jerusalem, including three for Passover. Barclay notes there’s no real contradiction here—only different points of view.

Today’s Gospel story is about Jesus’ Cleansing the Temple. It could not have happened twice. He angered the Temple authorities so much that they had a warrant for his arrest. And this story is only in Chapter two of John’s gospel. Barclay notes that John is more interested in truth than in facts; he’s not writing a chronological biography of Jesus. He’s thinking back to the great prophecies of the coming of the Messiah: “And the Lord whom you seek will suddenly come to the temple. For he is like the refiner’s fire, and the fuller’s soap . . . , and he will purify the sons of Levi. . . .till they present a right offering to the Lord.

Right at the beginning he shows us Jesus acting as God’s Messiah must act. And he did. His anger is a terrifying thing. He formed a scourge out of cords and moved through those selling oxen and sheep and doves and the -money-changers sitting at their tables and drove them all out of temple and said, “Take these away and stop making my Father’s house a house of trade.”

The Passover was the greatest of all Jewish feasts. The law stated that every adult male who lived within fifteen miles of the holy city must attend. Now here are some facts that shaped Jesus’ anger. Astonishingly, it’s likely 2.25 million Jews sometimes assembled in Jerusalem in those days for Passover. And there was a tax that every Jew over 19 must pay—the Temple tax. It was one half shekel. At that time, the value of a half shekel was about 6 cents. It was the equivalent of almost two days of working man’s wages. In Palestine all kinds of currency were valid—from Greece and Egypt and Tyre and Sidon and Palestine. But the Temple tax had to be paid The Jewish shekels; the foreign coins were considered unclean; they could be used to pay ordinary debts, but not debts to God.

So in the Temple courts sat the money-changers. If there trade had been straight forward, they would have been fulfilling an honest and necessary purpose. But they charged to change the money and they charged get their change. The poor pilgrims couldn’t win. The wealth that accrued from the Temple tax and from this and from this method of money-changing was—well—beyond belief.

It was estimated that the annual profit was about $100,00 for the Temple. And Barclay says that when Crasus captured Jerusalem in 54 B.C. he took from it $3,400,000 without coming near exhausting it.

What enraged Jesus was that pilgrims to the Passover who could ill afford it, were being fleeced at an exorbitant rate by the money-changers. It was a rampant and shameless social injustice—and what was worse it was being done in the name of religion.

Besides the money-changers, there were sellers of oxen and sheep and doves. Many pilgrims wanted to make a thank offering. Victims for the sacrifice could be bought in the temple court. But no. The law was that the animal had to be unblemished and, therefore, the Temple authorities set up appointed inspectors (muncheh) to examine the victims that were to be offered. The fee was 1 cent. If the worshipper bought the animal outside the Temple, of course, it would be rejected. A pair of doves would cost about 4 cents outside but 75 cents inside. Here again, was bare-faced extortion of the poor and humble pilgrims who, as Barclay says, were practically blackmailed into buying their victims in the Temple booths. It was that which moved Jesus into flaming anger. St. Jerome thinks that the very sight of Jesus made the whip unnecessary. A certain fiery and starry light shone from his eyes and the majesty of the Godhead gleamed in his face.

Now, Barclay suggests there are at least three reasons why Jesus acted as he did..

When I attend Mass once in a while I’ll find a priest who rushes through the Eucharistic Prayer in a distracted fashion—the most solemn part of the Mass, or who doesn’t say the words of Consecration reverently. I ache inside for the priest, for myself and for the people who are not being edified.

Second, Jesus acted as he did to show that animal sacrifice and all that went into it was completely irrelevant. For centuries the prophets were saying exactly that. “Bring no more vain offerings” (Isaiah 1:11). “They love sacrifices; they sacrifice flesh and eat it; but the Lord has no delight in them.” (Hosea 8:2:12-16).

Third. The Temple authorities were making the Court of the Gentiles into an uproar and a rabble where no man can pray. The lowing of the oxen, the bleating of the sheep, the cooing of the doves, the shouts of the hucksters, the rattle of the coins, the voices raised in bargaining disputes—all these combined to make the Court of the Gentiles a place where no one could worship. The conduct in the Temple court shut out the seeking Gentile from the presence of God. It may well be that this was most on Jesus’ mind. Jesus was moved to the depths of his heart because seeking pilgrims were being shut out from the presence of God. “Mark has Jesus say: My house shall be called a house of prayer for all nations, but you have made it a den of robbers   ” Mark 11:17).

Bishop Robert Barron in a reflection in the Magnificat liturgical magazine for today’s gospel has this to say . . . .

The most fundamental vocation of human beings is to give God right praise. In this act of adoration we become rightly ordered in ourselves. Accordingly sin is the suspension of right praise., a turning of the heart toward creatures rather than the Creator, which results in the disintegration of self and of society. All of the institutions of Israel—law, covenant, prophecy and Temple—were intended to bring the nation back in line to make Israel a priestly people.

Hence, the corruption of the Temple represented much more than simply an issue of social or institutional injustice. It was the compromising of the identity of Israel. Jesus comes to restore God’s holy people to right praise—and to turn inside out and upside down all forms of false worship. Thus, as you contemplate the image of Jesus cleansing the Temple, ask yourself the following question, “Precisely what or whom do I worship?”

As I conclude this reflection, I am reminded that St. Paul has told us that our bodies are temples of the Holy Spirit (1 Cor. 6:19).  And so, I’ve added to our title, Cleanse us too, O Lord!  Bishop Barron suggested that we ask ourselves what or whom we worship?   In America today we have all kinds of idols besides the Creator and we treat our bodies as anything as the temple of the Holy Spirit that they are.

Jesus, I wonder what your disciples thought when they witnessed your blazing anger.

Some even today say it’s so out of character for you.

Would that you would come into our world today and throw out those who hurt the poor!

But I know that’s up to us to do, right?

But at least help me to form “right praise” and cast out the sin in my life.

Yes. Jesus, this is one more instance of  “the Jesus I know and love.”

(Ya know, I never thought about your anger before.)

And before you go, here’s a Lenten hymn for you.Click here. Be sure to enter full screen and turn up your speakers. This is a song by John Michael Talbot

2 thoughts on “The Cleansing of the Temple ~ Cleanse us too, O Lord!”