Day of prayer for the legal protection for unborn children

Posted by bobtraupman on January 22, 2019 in Ordinary moments of Ordinary Time, Transforming our Nation, What is Love? 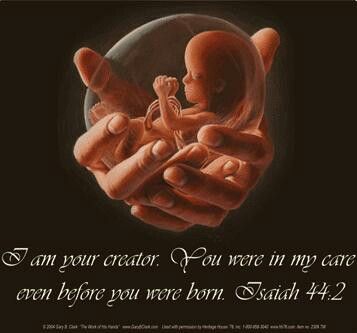 Today is the forty-fifth anniversary of Roe v Wade.

Let’s stand down, stop the condemning and judging and seek light and understanding, forgiveness and wholeness, kindness and compassion for the young in desperate situations who have no one to turn to and who may themselves be abandoned.

We live in a world that will not recognize the inviolateness and sacredness of every person on this planet.

My sense is that the sin of those who are quick to condemn others is as great as those who bring violence and bloodshed into their very own bodies.

We ALL have much for which to ask forgiveness.  We ALL need to ask God to increase our capacity to love and turn away from condemnation.

The ones Jesus loves the most are the lost sheep of this world.  He would reach out to those who have had abortions!

The enemies of Jesus are those who justify themselves, the self-righteous, the hypocrites, the ones who know nothing of compassion, those who would not think of walking a mile in someone else’s shoes but would lash out with their tongue~sometimes from those who minister the Body and Blood of Christ at the altar.

St. John has said no one is without sin!  He also said that  “Anyone who hates his brother or sister is oneself a murderer.” (1 John 3:15)

According to a new Marist College/Knights of Columbus poll last year, a strong majority of Americans and even a narrow majority of Americans who identify as “pro-choice” support substantial restrictions on abortion, including limiting abortion to the first trimester or not using taxpayer money to fund abortions.

Overall, the poll found that 74 percent of Americans support one or more such restriction, including 54 percent of those who call themselves “pro-choice.”

The poll was conducted Dec. 12-19, 2016, in English and Spanish among a random sample of American adults.

“There is a consensus in America in favor of significant abortion restrictions, and this common ground exists across party lines, and even among significant numbers of those who are pro-choice,” said Knights of Columbus CEO Carl Anderson.

“This poll shows that large percentages of Americans, on both sides of the aisle, are united in their opposition to the status quo as it relates to abortion on demand. This is heartening, and can help start a new national conversation on abortion.”

Andrew Walter, Vice President for Communications and Strategic Planning for the Knights of Columbus, argued the results point to a “real groundswell of support” for limiting, if not eliminating, abortion rights.

“The labels don’t correlate with the policy positions,” Walther said. “Many people who identify as pro-choice support what’s usually seen as pro-life legislation.”

When it began in the aftermath of Roe v. Wade, the March for Life turned the nation’s conscience toward the particular horror of abortion and the taking of human life that it entails. The four decades since have seen millions of deaths from abortion in the United States alone.

In each of those deaths, the world lost a unique and irreplaceable person.

Unfortunately, the loss of those lives to abortion is not the only casualty of Roe. Rather, the callous acceptance of – and, in some quarters, celebration of – the right to abortion has also planted the seeds for a broader disrespect for vulnerable human life.

Those seeds are now bearing bitter fruit in the way in which the lives of those who are disabled, ill and elderly are being treated in fact and in law.

The new legislative year brings the question of physician-assisted suicide to the legislative docket of several states, which will consider whether or not the lives of those who are ill, elderly or otherwise vulnerable should be protected or not.

Sadly, even the nation’s capital recently joined the small but growing number of jurisdictions that have answered that question with a resounding “no, those lives shouldn’t be protected.”

These legislative proposals that are brewing would allow physician-assisted suicide with such scant safeguards that they would be laughable if they were not tragic. However, the arguments in favor of these legislative initiatives have their roots directly in the soil of Roe.

They reflect Roe’s legacy that some lives are worth defending and others are not. In the context of abortion, an infant who is eagerly anticipated by loving parents is celebrated, fought for, and loved months before birth. Yet, a similar infant who is not so fortunate and who is not wanted is easily discarded as a matter of right.

In the context of those who are ill, those who have access to health care, a loving, supportive family, treatment for pain, and access to emotional and psychological care are encouraged to fight against deadly diseases.

However, those who are impoverished, who believe that they burden loved ones, or who are not well treated for physical and emotional pain, are given the opportunity to end their lives. In many cases, they are encouraged to do so by circumstances in which insurance may cover the costs of their suicide but not their medical treatment.

In the context of those with disabilities, a similar inconsistency reigns.

Nationally and internationally, advocacy groups celebrate the passage of legislation, the enactment of programs, and the funding of initiatives to enhance the lives of those who live with disabilities. Yet, these advantages apply only to those who have survived a prenatal diagnosis that indicated the presence of the disability.

Just when legal protections for those living with disabilities increases, the sad reality is that more advanced prenatal diagnosis techniques condemn many with disabilities to an early death. Stunningly few children with Down syndrome are born each year, and this is a result likely to be replicated as prenatal testing for other conditions increases rapidly.

Ironically, even some fierce pro-life advocates who would defend the lives of healthy infants have been willing to concede an exception for those children who will live with a disability.

They reflect Roe’s legacy that personal autonomy is to be valued at all costs – even over life itself.

Yet, the rhetoric of those who advocate for the end of life in these circumstances argues that the autonomy of the woman carrying the child or the suffering patient should be the value that prevails.

In the context of those who are ill or elderly, the celebration of personal autonomy in a decision to end life does not take into account the financial pressures that often drive that decision or the overwhelming desire not to burden others that leads to the ending of life.

Contrary to common perception, it is not physical pain that drives the decision to take advantage of physician-assisted suicide. It is fear of being a burden or losing autonomy that tops the list. More importantly, an exaggerated sense of personal autonomy belies the fact that the individual is not the only one with an interest in his or her life.

They reflect Roe’s legacy that legal requirements, procedural protections, and seemingly detailed guidelines can legitimize acts that, for the vast majority of human history, were recognized as wrong. Perhaps they reflect the way in which Roe can dull the conscience into believing that legality can create legitimacy and that a society can satisfy itself that there can be a regulated, rational way to do a wrongful act.

Abortion statutes split hairs over the meaning of a partial birth abortion and assisted suicide statutes feign certainty about the disinterestedness of witnesses or the absence of depression. Yet, the veneer of legality in both cases belies the fact that the underlying and irreversible acts that they facilitate raise grave moral concerns.

Roe’s legacy of devaluing unwanted human lives, misconstruing autonomy, and dulling the conscience with legalisms is one that has left four decades of lost lives in its wake.

However, it has also laid the groundwork for more tragedies to come.

whose tender love brought Love Itself into our world,

to receive the same tender care and love you wish for each of them. . . for each of us . . .  as you offered the strict, yet tender, love of a Jewish mother upon  Jesus, the Son of God

who was nourished at your tender breasts,

cradled in your arms,

bounced upon your knee;

whose booboo was kissed by your lovely mouth,

whose dead body you received come down from the Cross.

You were the one from Jesus learned the joys of human love.

Receive today all of Jesus’ brothers and sisters on this planet, born and unborn.

Draw us all into that one great mystery of divine/human love which is the glory of our Christian faith,

the Incarnation of the son of a young beautiful woman, Son of God,

our Brother, our Friend, Our Lord and Savior Jesus Christ!

And now, before you go, here’s the penitential hymn “Remember Your Love”  Click Here. Be sure to turn up your speakers and enter full screen.

And P.S.  Don’t worry about the aborted children;  the innocent ones will shine like the stars in God’s kingdom.

The tragedy is that they will never set foot on this beautiful planet.

Tags: ", "he who hates his brother is a murderer, "No one is without sin", "Remember your love", "some lives are worth defending and others are not", Day of prayer for unborn children, Let's stand down and stop condemning and judging the other side, Roe v Wade, Roe's legacy of devaluing human life, St. John said, The effects of Roe on laws affecting assisted suicide ~ the disabled and elder care Permalink

← The Legacy of a martyr ~ what are you willing to give your life for?
St. Paul’s Ode to Love ~ How do we measure up? →